I had been to Starbucks in Seattle,

had tasted the future,

and was ready when they opened

My drink was a

Twice a day. Every day.

I believe my kids still shout this in their sleep

from time to time

because it was mostly them

who ran in on our way to school.

(This sounds like really bad parenting but, hey, they got a

After a decade of that,

and I moved on to local shops

where I settled for the last decade or so.

Twice a day. Every day.

At a coffee shop near my house,

That’s how it goes with addiction.)

I haven’t bought a coffee since.

I make it myself in this adorable

coffee maker my daughter bought me. 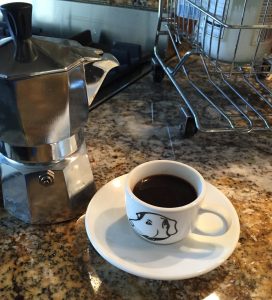 People talk about how hard it is to change.

Or, it can be as easy as choosing.

* This was not the first Starbucks in Chicago, but it was the first in my then neighborhood near Oak & Rush Street. Starbucks opened its first Chicago shop at 111 W. Jackson Blvd. in the Loop on Oct. 19, 1987.

< back to cafe diem